December 06, 2017
Most drugs are molecules, but most molecules are not drugs. Every year, millions of new molecules are prepared, but only a very small fraction of these are ever considered as possible drug candidates. A chemical compound must possess certain characteristics if it is to cross the hurdle from being an organic molecule to becoming a drug molecule. Medicinal chemistry is the applied science that is focused on the design (or discovery) of new chemical entities (NCEs) and their optimization and development as useful drug molecules for the treatment of disease processes.

A molecule is the smallest particle of a substance that retains the chemical identity of that substance; it is composed of two or more atoms held together by chemical bonds (i.e., shared electron pairs). Although molecules are highly variable in terms of structure, they may be organized into families on the basis of certain groupings of atoms called functional groups. A functional group is an assembly or cluster of atoms that generally reacts in the same way, regardless of the molecule in which it is located; for example, the carboxylic acid functional group (-COOH) generally imparts the property of acidity to any molecule in which it is inserted. It is the presence of functional groups that determines the chemical and physical properties of a given family of molecules. A functional group is a centre of reactivity in a molecule.

1. Partition Coefficients- The partition coefficient of a drug is defined as the equilibrium constant of drug concentrations (symbolized by the square brackets) in the two phases.

Since partition coefficients are difficult to measure in living systems, they are usually determined in-vitro, using n-octanol as a model of the lipid phase and an aqueous phosphate buffer at pH 7.4 as a model of the water phase. This permits standardized measurements of partition coefficients. Because it is a ratio, P is dimensionless. P is also an additive property of a molecule, since each functional group helps determine the polarity and therefore the lipophilic or hydrophilic character of the molecule. These substituent contributions are widely utilized in quantitative structure-activity studies.
Partition coefficients thoroughly influence drug transport characteristics during the pharmacokinetic phase; that is, partition coefficients affect the way drugs reach the site of action from the site of administration (e.g., injection site, gastrointestinal tract). Drugs are usually distributed by the blood, but must also penetrate and traverse many barriers before reaching the site of action. Hence, the partition coefficient (which reflects a drug’s ability to be soluble in both aqueous and lipid phases) will determine what tissues a given compound can reach. On the one hand, extremely water-soluble drugs may be unable to cross lipid barriers (e.g., the blood–brain barrier) and gain access to organs rich in lipids, such as the brain and other neuronal tissues. As is apparent, partition coefficients (quantified by the logP value) are important considerations in drug design. To be successful during the pharmacokinetic phase of drug action, the drug molecule should demonstrate the right combination of lipid solubility and water solubility. This property is best represented by the logP value. If the logP value is too low, the compound is too water soluble and thus will be unable to penetrate lipid barriers and will be excreted too rapidly; if the logP value is too high, the compound is too lipid soluble and will be undesirably sequestered in fat layers.

Although a capacity to cross biological membranes and barriers is important for most drugs, there are also pharmaceutical agents that display mechanisms of action that are more dependent upon activities at surfaces. Pharmacological reactions may occur on biological surfaces and interfaces. The energy situation at a surface differs markedly from that in a solution because special inter-molecular forces are at work; therefore, surface reactions require specific consideration. In living organisms, membranes comprise the largest surface, covering all cells (the plasma membrane) and many cell organelles (the nucleus, mitochondria, and so forth). Dissolved macromolecules such as proteins also account for an enormous surface area (e.g., 1 ml of human blood serum has a protein surface area of 100 m 2). Biological membranes also
(i) serve as a scaffold that holds a large variety of enzymes in proper orientation,
(ii) provide and maintain a sequential order of enzymes that permits great efficiency in multi-step reactions, and
(iii) serve as the boundaries of cells and many tissue compartments. In addition, many drug receptors are bound to membranes.

Dissolution refers to the process by which a solid phase (e.g., a tablet or powder) goes into a solution phase such as water. In essence, when a drug “dissolves,” solid particles separate and mix molecule by molecule with the liquid and appear to become part of that liquid. When a tablet or other solid drug form is introduced into a beaker of water or into the gastrointestinal tract, the drug begins to pass into solution from the intact solid. Unless the tablet is a contiguous polymeric device, the solid matrix also disintegrates into granules, and these granules deaggregate in turn into fine particles. Disintegration, deaggregation, and dissolution may occur simultaneously with the release of a drug from its delivery form. Dissolution is a kinetic process, the rate of dissolution reflects the amount of drug dissolved over a given time period. In certain cases, an equation can be exactly derived that describes the dissolution time dependence. 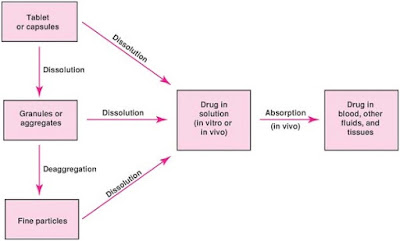 Since drugs interact with optically active, asymmetric biological macromolecules such as proteins, polynucleotides, or glycolipids acting as receptors, many of them exhibit stereochemical specificity. This means that there is a difference in action between stereoisomers of the same compound, with one isomer showing pharmacological activity while the other is more or less inactive. Therefore, complementarity between an asymmetric drug and its asymmetric receptor is often a criterion of drug activity. The effects of highly active or highly specific drugs depend more upon such complementarity than do those of weakly active drugs. Occasionally, the stereo-selectivity of a drug is based on a specific and preferential metabolism of one isomer over the other, or on a bio-transformation that selectively removes one isomer.

Hammet correlations were among the first to be used and represent the classical way of quantifying electronic properties. The Hammet correlations (Hammet, 1970) express quantitatively the relationship between chemical reactivity and the electron-donating or electron-accepting nature of a substituent. Historically, they have been perhaps the most widely used electronic indices in QSAR studies of drugs. The Hammet substituent constant (σ ) was originally defined for the purpose of quantifying the effect of a substituent on the dissociation constant of benzoic acid:

Popular posts from this blog

Leading American Heart Association experts issued new guidelines for High blood pressure that means tens of millions more will meet the criteria for the condition, and will need to change their life styles or takes medication therapy to treat it.
Under the guidelines, formulated by the American Heart Association (AHA) and the American College of Cardiology (ACC), the number of men under age 45 with a diagnosis of high blood pressure will triple, and the prevalence among women under the age 45 will double. Dr. Robert M Carey who is the co-chair of the committee tha…
Read more 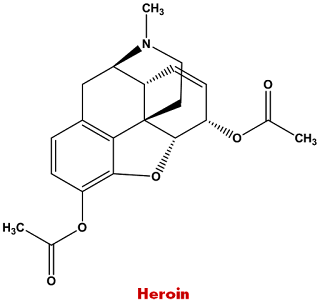 Medicinal chemistry is the scientific discipline at the intersection of chemistry and pharmacy that deals with the design, identification, synthesis and development of new molecular entities for therapeutic use. The main aim of medicinal chemistry is the design, discover and development of new compounds that becomes as a drug for therapeutic use. This process involves a team of workers from a wide range of disciplines such as biology, chemistry, biochemistry, pharmacology, medicine, mathematics and computing, amongst others. Medicinal chemistry also involves the isolation of compounds from natural sources.  The discovery or design of a new drug not only requires a discovery or design process but also the synthesis of the drug, a method of drug administration, the development of tests and procedures to establish how it operates in the body and a safety assessment. Drug discovery may also require fundamental research into the biological and chemical nature of the diseased state. These an…
Read more